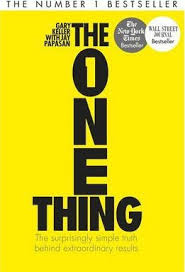 The One Thing is a New York Times bestselling self-help book, written by Gary Keller. It came out in 2013 and the central idea – that you find and prioritise the One Thing you’re good at – is worth thinking about in 2020, when it’s so easy to despair at so much loss, yet crucial to fight that feeling and believe that we will emerge from this pandemic with new and better ideas.

Keller encourages readers to first identify and then prioritise their One Thing. Don’t try and multitask, he says. Don’t hold off for the right moment. Don’t hedge your bets. Simply shut the door and give your One Thing four hours a day and you will see results.

Of course, this ignores is the fact that many of us have other responsibilities. Carers and parents can’t say, ‘Er, sorry I am doing my One Thing for the next four hours, so you’ll have to feed yourself and change your own nappy.’ Nor can workers on a minimum wage with bills to pay. Nor those who have been homeschooling since March (eyes six-year-old eating toast over my keyboard and wanting me to look up Ronaldo’s Best Goals on YouTube).

Keller does touch on this point briefly, and says, basically, tough, find that four hours, work it out (sipping on a cup of Earl Grey tea his secretary delivered to him as he calmly types out this advice). But I appreciate that he sets a limit of four hours, because that is just about achievable and doesn’t let anyone off the hook domestically because they’re doing their One Thing. If anything, Keller advocates for more time with loved ones by being super efficient and focussed while at work.

When I thought about it, my One Thing boils down to sharing good sentences. I know that a good sentence has the power to change someone’s mind, to educate, to create empathy, to entertain, console, move, expand a reader’s worldview or just keep them company. The medium may have evolved from handwritten letters to Twitter and e-books, but the magic remains unchanged.

Identifying my One Thing as sharing good sentences encompasses everything I do – writing fiction and feature stories, editing, and also promoting the work of other writers, which I want to do more of. They might be newly published or long dead, translated, poetry, fiction, whatever – I get a huge kick out of finding excellent writing and letting others know about it. So with this new One Thing inspired resolve, here are some books I’ve been reading lately that I think are worth seeking out.

Of Memory and Furniture by Bron Bateman

This is a beautiful collection by WA poet Bron Bateman, published by Fremantle Press. The language is both dreamy and precise, touching on childbirth and the ‘tenderless intimacy’ of medicine, old wounds made less powerful with time, tattoos and BSDM, which I began to understand as a way of reclaiming one’s body from others and returning it to a safe and trusted place. Like the best poetry, it makes the strange familiar and the familiar strange, and I think anyone hoping to write poetry would find much to inspire and provoke here. These are potent poems. They demand time, and repay it in unexpected ways. I couldn’t get them out of my head and know I’ll go back to them.

A brilliant, spacious family saga set in Korea and Japan across the twentieth century, beginning in 1911 with the birth of Sunja, the much-loved only child of a couple who run a guest house. Her pregnancy at a young age to a wealthy, married Yakuza, or organised crime boss, changes the course of their lives, as the story moves from Korea to Osaka. If, like me, you are longing to travel, this is just as good as getting on a plane.

The Millstone by Margaret Drabble

Apparently Margaret Drabble is a bit tired of this book because it’s the one that all her readers adore and want to talk to her about. It’s a slim novel, told in first person by Rosamund, a young middle-class woman in London who falls pregnant in the 1960s, when there were few single mothers and no child support (although Rosamund does live for free in her parents’ Marylebone flat, which is not typical).

This feels like a rare story as to raise a child alone at that time was unheard of, and so many mothers were forced to give up their children to ‘good families’. I have no idea where I found my copy – perhaps in a free library – but I now want to read all of her books.

Her descriptions of London, especially the NHS in its early days, and the remarkable candidness of her voice, coming as it does from a generation who didn’t generally speak of such scandals, make this a compulsive read. I also loved ‘hearing’ that baby boomer voice, so familiar to me but always as an older authority figure, not a young woman.

All For Nothing by Walter Kempowski

Now this was incredible. Set in World War Two, the novel begins in the Georgenhof, a run-down, once-stately home in the village of Mitkau, East Prussia. The Russians are closing in from the East and the estate’s residents – a mother, her son Peter and their staff – must choose between staying where they are or travelling to Berlin.

This is World War Two in the domestic sphere, as children play with their toys, as mothers pack their best china and shut themselves away in their bedrooms, as a constant stream of people knock on the door in search of food and shelter and news of what’s happening out there.

It captures the catastrophe and collective anxiety of wartime in quietly devastating prose as the tension builds slowly, almost out of sight, and the characters are drawn away from their familiar surroundings and onto the road. Published by Granta Books, it was the final novel of the late German writer Walter Kempowski. 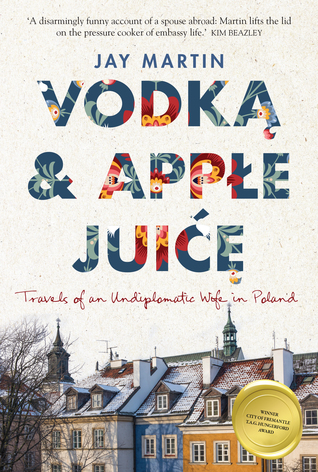 I listened to a podcast between Julie Sprigg and Jay Martin the other night while cooking dinner and afterwards downloaded Jay’s book and started reading. They have both published memoirs about their experience of living in Ethiopia and Poland respectively. Living in a foreign country myself, I am comforted by the stories of how others have coped with building a new life far from the familiar and it’s also fascinating to see how writers gather up such an experience and craft it into a narrative.

So I am now more than halfway through Vodka and Apple Juice, and loving it. Jay describes Poland so well, capturing the language, the people, seasons, the food and expat life in the small details, such as searching for coriander and attending extravagant embassy functions with flowing wine and smoked salmon, along the many frustrations that come with giving up your own work to move to a new city with your spouse. One thing Jay does do, which I haven’t with such dedication, is learn to speak Polish. In doing so she can talk to locals, work, travel with ease. Respect. I am inspired by her example.

What are you reading? Feel free to leave under-the-radar tips in the comments….

View all posts by Zoe Deleuil